Various types of pigmented nevi exist. They share one commonality: pigmentation that differs from surrounding skin. Nevi are by definition benign (or non-cancerous), and the vast majority do not require any treatment or intervention. However, some nevi require closer attention, and these include congenital melanocytic nevus, acquired melanocytic nevus in an aesthetically sensitive area such as the face, and nevus sebaceous.

What is a Congenital Melanocytic Nevus?

A congenital melanocytic nevus or CMN is a darkened (melanocytic) skin lesion (nevus) that is present at birth (congenital). Over time, CMN grow proportionally with the child, and often become thickened and elevated. Darkly pigmented hair may also grow from the lesion. These nevi are classified based on their size as small (< 1.5 cm), medium (if > 2 cm but < 20 cm), and large (> 20 cm in diameter or expected to be > 20 cm in diameter by adulthood). The large lesions are most commonly referred to as Giant Congenital Melanocytic Nevus, and frequently cover large portions of the trunk or an extremity.

What is the treatment of choice?

Due to conflicting reports in the medical literature regarding the risk of small and medium sized CMN becoming cancerous, treatment decisions call for sound judgment based on experience and knowledge. The two main treatment options include

Less debate exists on the treatment for Giant CMN, and the treatment of choice remains surgical excision. Often, lesions in the medium to large categories are too large to excise and close in a single setting, and may require serial excision or tissue expander reconstruction.

Tissue expander reconstruction is another common form of reconstruction in which balloons are placed under the surrounding normal skin. Over the course of several weeks these balloons are filled with saline. As the balloon expands, the normal skin responds by creating more skin, which can eventually be used to cover the defect of the excised CGN. Both serial excision and tissue expansion are time-proven forms of reconstruction, and our surgeons can help guide you and your child regarding which is best at optimizing outcomes.

What is an Acquired Nevus?

Unlike congenital nevi, acquired nevi are those which are not present at birth and appear later in life. These are benign (meaning non-cancerous).

What is a Nevus Sebasceous?

Nevus Sebasceous refers to a type of nevus that is congenital and most often located on the head, face, or neck. It is a common birthmark.

Are There Other Types of Pigmented Nevi?

To schedule a pigmented birthmark (nevus) consultation, contact our office at 512-600-2888. 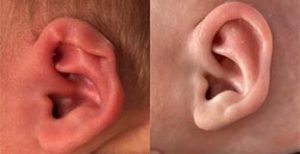